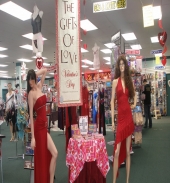 Its most popular item might be the multi-function Rabbit, but Xpressions promises you a clean and classy shopping experience.

The crowning glory of Xpressions' five New York stores is certainly their movies and toys - each carries more than 3,000 sexy titles and more novelties than its owner, who preferred to remain anonymous, (literally) can keep track of. "It's thousands upon, thousands, really. It's pretty crazy," he said. But its lingerie stock is hearty, and getting more blood as Xpressions works harder to earn respect as a legitimate retailer.

In 2005, when the current owner bought the Xpressions chain, he conveyed floor space that was "inunduated with VHS tapes and DVDs" to spots for shelves, lingerie racks and broad aisles.

Today, its biggest lingerie brand, Leg Avenue, gets 100 square feet in every store, and Xpressions doubles its orders of the brand every year. "I like Leg Avenue because it's packaged neatly, and women can easily find what they want," the owner said.

The space-conscious - you might even say picky - store also likes Magic Silk's boxed plus-sized lingerie, Dreamgirl's neatly packaged Red Diamond Collection, and pieces by Excitements and Fantasy. Each store also carries 12 styles of shoes, which are refreshed every three to six months. And the owner handpicks most of his swimwear and costumes from wholesalers in New York City, nabbing what he thinks "looks good quality." (Leg Avenue falters a bit here: "Its swimsuits were cut way too small for the average woman, so we stopped carrying them," he said.)

That good quality is placed upon neat racks or shelves atop carpeted floors, or upon mannequins under good lighting, in stores with massive windows and lots of space: The largest is 10,000 square-feet and brings to mind a more risque Target.

The Target image is starting to work - most customers now are "the girl and guy next door," and many college students are regulars. Pop your head in the door, and 50 percent of the people you'll catch shopping are women, the owner says, compared to about 20 percent when the first Xpressions opened in 2001. The owner credits the shift largely to his website, which promises visitors an exciting, fun and different shopping experience - and has pictures of the store to back it up.

"Even older women are coming in, too, because they're getting to a time in their life when they may have never visited a store like this, and hearing from a friend how nice they are, they're taking the leap," the owner said.

But perhaps the best indicator of how Xpressions sees itself is its next - and most sophisticated - foray: bridal. The owner plans to start stocking classier pieces by Fantasie and Dreamgirl to bring even more people in on his (not-so-dirty?) little secret.

"Nobody quite understands what we do," the owner said. "As much as we've done in bringing Xpressions into the mainstream, and diversifying it in the market, it still has to fight for its reputation. And we're doing it."