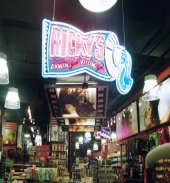 Since its inception in 1989, Ricky's NYC has served New York as a retailer of year-round gifts, cosmetics and apparel. While the company excels in this market, each fall the Ricky's locations open their doors to a flood of customers shopping for Halloween.

"We are a shopping experience, especially for Halloween," said Todd Kenig, CEO of the company. "We are a store where you come in for what you really need and walk out with something you have to have, but don't need."

Recently, the retailer opened up its 23rd location at 2906 Broadway, formerly a Kim's Video, at the Columbia University campus. The two-floor location has a total of 6,000-square-feet with each floor measuring at 3,000-square-feet. According to Kenig, Ricky's plans on opening more locations depending if "the right rent deal comes along."

During off-season, Ricky's carries a select amount of costumes, whereas during Halloween they have approximately six major vendors. During New Year's they brought in Dreamgirl and for St. Patrick's Day, they brought in Leg Avenue's holiday-inspired costumes. "Right now there are a few brands that are really good. Rubie's has come out with a lot of sexy costumes and they're really on the cusp of finding something good in the sexy division," said Kenig. In fact, the only brand of shoes he will be bringing in this upcoming season is Rubie's. "I am also very happy with Leg Avenue costumes this year and Disguise has come out with sexy super hero costumes, which I think will do very well."

Colorful displays, which are merchandised every month and a half, and neatly organized rows of product help Ricky's cater to an impulsive shopper. While apparel racks feature shopper-friendly packaged styles, the outside window display showcase mannequins sporting enticing costume styles. "We have a meeting on what vendor we want to promote or what items we want to promote," said Kenig. "A lot of vendors also come to us and asks us to put their products in the window."

Ricky's has become a Halloween destination for women ranging in ages from six to 60 from all economic backgrounds.