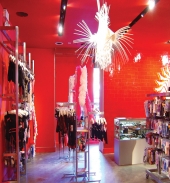 It is no secret that New York City is, and has been, on the cutting edge of sexy styles for quite some time. Located in Manhattan's West Village, The Pleasure Chest has been a fixture for more than 35 years. The store, which dedicates ten percent of its floor space to lingerie, carries brands like Dreamgirl, Shirley of Hollywood, Leg Avenue, Fantasy, Stormy Leather and Lip Service.

Brian Robinson, owner of The Pleasure Chest and nephew of the man who started the business, said that the store's usual clientele is made up of professional women between the ages of 30 and 50, mostly shopping themselves as well as for bachelorette parties, and weddings. At certain times of the year, however, the store experiences an upsurge in male shoppers and visitors.

"Around the holidays and Valentine's we see a lot of gift buying from men," said Robinson.

Since the company also carries items for men, such as underwear, guys can grab a few items for themselves while perusing for gift ideas. Men's brands include Ginch Gonch and Andrew Christian, which has become a very popular item for Pleasure Chest customers.

An average bra and panty set will sell for about $50. About 15 percent of the time, Robinson estimates, women come into the store shopping for lingerie, and end up picking up a pair of sexy stockings as well.

From Robinson's point of view, the biggest change in the industry is that lingerie stores nowadays carry more non-apparel related items that don't necessarily fall into the sex toy category, yet still bring a new level of intimacy into the bedroom.

"One of the biggest changes that I've noticed in the intimate apparel industry is calls to us wanting to add non-apparel merchandise to their product line," said Robinson. "We're finding many of the lingerie stores starting to carry edible massage oils, playful yet tame intimacy kits, personal massagers that don't cross the line into perceived sex toys. I think now the consumer starts to expect romantic playful items when they go into lingerie and intimate apparel salons."

The Pleasure Chest has two other locations, in Chicago and Los Angeles. Having locations in big, media-driven cities such as those keeps the company's name visible, allowing it to hold onto its reputation as "trustworthy" and "cutting edge."

That kind of notoriety has kept long-time buyers, such as Justina Fader and Shawn Petraborg, coming back time and time again, as well attracting some high-profile buyers such as Halle Berry who have spoken highly of the company in other publications.

Visitors to the store can participate in its weekly workshops, which range in nature from wild and exotic to mild and tame. The store has also had fashion shows, launch parties and often has djs spinning the hottest new records on the weekends.

The Pleasure Chest, like New York City, is filled to the brim with some of the most highly desired fashions in intimate apparel. All it takes is one flip of the lid to see to that the contents of this chest are worth deeper observation.