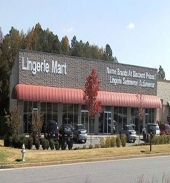 What originally started as a desktop computer in Steven Rapp's basement in 1997 has morphed into a 15,000-square-foot lingerie warehouse outside of Atlanta.

The Lingerie Mart is an intimates mecca, with a thriving wholesale and retail business drawn in by both its brick-and-mortar store along with its website, www.LingerieMart.com. Today, the company boasts 18,000 wholesale customers worldwide, up from 16,000 in September 2008, said Rapp.

Additionally, the website sees approximately 10,000 unique visitors daily and "that number is increasing."

The allure of the Mart, Rapp says, is that it offers all categories of brand name lingerie at discount prices. The store carries well over 100 manufacturers in the lingerie and intimate apparel industries, including recently-added Vedette, Fashion Forms, Bra Baby, Carnival Creations, Empire, Especially Yours and Magic Curves Shapewear.

Currently, shoppers can nab basics, sexy lingerie, costumes, dancewear, sleepwear, shapewear, swimwear and bridal. In a couple of months, customers will also be able to sift through a new boutique that will be opening within the warehouse. "Because we have so many women coming to the door, we decided to offer new things other than just lingerie," said Rapp.

The new space, which will occupy 1,800-square-feet of the warehouse, will be strictly a retail business for now and will offer jewelry, hats, clothing, dancer shoes, "very cool clothing from all different parts of the world," sportswear and more. Rapp has added many new national and international brands to occupy the space, one of which is Hollywood Heels, he said.

Although Rapp would not specify which brands are top-sellers, he claimed "our top selling classifications continue to be our bras and plus size bras, shapewear and sexy lingerie." The average customer spends anywhere between $19 and $25 for bra and panty sets and will spend an average of $50 per visit.

The Mart draws in customers through a smart, Internet-driven marketing scheme that aggressively pushes its website. On search engines, the store shows up on top for a variety of queries: On Google, it comes up as third on the list for "wholesale lingerie" as a search term; it comes up as first when searching for "retail lingerie" and "wholesale thongs."

All this, thanks to a man who had an early faith in "the thing called the Internet." In 1997, after working for years as a sales rep for companies including True Form Foundations and Maidenform, Rapp decided to go independent. He then took an ever bigger risk: taking his business online. "A lot of my friends said, 'No one's going to buy lingerie online, you're crazy. Go get a real job.' But the day after I launched it, 30 different buyers from around the world had seen that website and they wanted to place an order. That's when I knew. That's when I said, 'I think this Internet thing is going to be very good.'" The website currently draws in more sales than the brick-and-mortar location "by a large percentage" said Rapp.