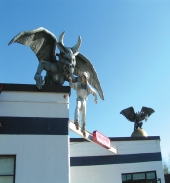 When Russian-born Jim Burda opened the Halloween Bazaar in 1979, he did so without ever having celebrated a single Halloween in his life. However, this fact has not kept Jim, his wife Elissa, or their sons from supplying costumes, lingerie and accessories to Halloween revelers each year.

"On some level, I think [Jim] is still amazed by Halloween," said Elissa who first met her husband a year after the store opened.

The Canton store has a unique method of letting shoppers know when it is time to start shopping for costumes again.

"The customers know that when the gargoyles are up they can come in," said Elissa.

The gargoyles of which she speaks are three menacing figures perched up on the store's rooftop, one of which is dangling a frightened-looking man in a painter's suit over a ledge.

Upon entering the Canton store, customers will instantly notice the spacious layout. After passing by the retail area at the front, customers can follow a path down the hall to 10,000 square-feet of space filled with costumes. Such a large selection is what sets Halloween Bazaar apart from other costume stores, according to Michael Burda.

"We go out of our way to bring product in here that other places don't carry," added Elissa. "People like variety."

The Halloween Bazaar also carries a large selection of the most popular lingerie brands. Two thousand square-feet of floor space is dedicated to lingerie alone, which in Elissa's opinion, makes the lingerie all the more prominent. They carry many brands including Leg Avenue, Playboy, Dreamgirl, Secret Wishes, Ellie Shoes, Shirley of Hollywood and more. Over the last five years, according to Elissa, the store's lingerie space has grown "tremendously."

It is difficult to pinpoint the typical Halloween Bazaar customer. "Our customers are school age to retirees," said Elissa. "It encompasses such a wide group of people. It can knock your socks off to sit back and look at the people who come into the store."

Halloween Bazaar takes several different approaches to advertising. They have a color flyer, which the store sends out in September that usually runs about eight pages. Halloween Bazaar also runs 15-second ads with voice before the start of movies at a few of the local theaters.
Spooky shows held at the Canton store feature large props, such as smoke-breathing gargoyles, with lights and sound. Hired models don costumes and walk around the floor to help give customers an idea of how the costumes look when worn.

Whoever said bigger is better, must have had the Halloween Bazaar in mind before coining that phrase. With tons of space for costumes, lingerie, sexy shoes and accessories, this store surely has no problem scaring up customers.