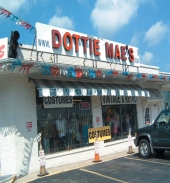 On the surface, high-schoolers, attorneys, cross-dressers, soccer moms, gypsies and baseball players have very little in common. But when it comes to finding the perfect costume for a special party, Dottie Mae's Costumes gives young and old giving Kansas Cityans ensembles for every occasion.

In 1996 Dottie Mae's Costumes opened as an antique store that sold a variety of collectibles, as well as mannequins dressed in vintage clothing, which eventually became a huge hit.

"We began to see a trend of people requesting the clothing off the mannequins for costumes, not as collector items," said Dottie Mae Groves, co-owner of Dottie Mae's Costumes. "They also started asking for wigs as each time we sold one the mannequin we would replace it with something new."

As time elapsed, the 10,000-square-foot antique store transformed into an emporium of storybook characters, complete with hats, boas, stockings, shoes and vintage clothing.

Naturally, September and October present busiest times as the costume store accommodates Halloween traffic, but during the off-seasons, Dottie Mae's works with local schools and assists with costuming needs for fall dramas and spring musicals.

Additionally, Dottie Mae's is associated with several Major League Baseball teams that purchase funny costumes for their rookie players.
"They [rookies] have to wear that costume on the bus, on the plane and into the hotel of the city that are going to," said Groves. "Needless to say the costumes they are given are outrageous and the laughs abundant."

While the company may be small in terms of administration-four part-time employees, Dottie Mae, and her husband Harold Groves- Dottie Mae's Costumes can fully cater to the needs of large companies and organizations. The store provides costumes for special needs children for the NASCAR family in the victory Junction Gang camp.

Customers spend approximately $60 in a single visit, according to Dottie Mae's, and its most requested brands include Leg Avenue, Dreamgirl, Roma, Music Legs, West Bay Wigs and Underwraps.