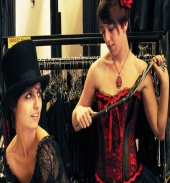 Terri Kennedy: Ipso Facto is a gothic –punk –alternative lifestyle store owned by myself, Terri Kennedy, and Robert Medeiros for 23 years.
In the early days the back half of the shop housed an art gallery, piercing booth, and music performance space. Eventually the retail area engulfed the entire 1000 square foot “bowling alley” shaped store, with offerings of alternative men’s and women’s clothing, footwear, jewelry, accessories, hair dye, cosmetics, incense, literature, cds and "spooky" collectables.
Ipso Facto’s legendary annual in-store anniversary event features music performances and giveaways, hearkening back to the independent spirit of the shop’s beginnings.
Located in the main shopping district of Fullerton, CA, the area is known for spawning numerous, now famous, punk bands in the late 1970s. When we opened in November, 1989, downtown was fairly gritty, lined with bars, pawn shops and empty storefronts, with tumbleweeds rolling down the street! The first four years were less than profitable, forcing both owners to work second jobs.
Today downtown Fullerton is a gentrified vibrant shopping and nightlife destination. Customers visit us from all over Southern California or even further..often dropping by after a visit to Disneyland since we are on the same street, five miles away. We are looking forward to the reopening of the long closed historic Fox movie theatre located across the street from our location to bring us more exposure still.
Ipso Facto’s fastest selling items include lolita, gothic, punk, industrial, retro and steampunk womens’ and mens’ apparel, goggles & respirators (popular with the industrial music crowd), corsets and parasols, boots and creepers, hair dye.
Our interior is simply decorated with checkerboard floor treatment and black and white walls utilizing gridwall displays for shoes, t-shirts, men’s and women’s clothing. Our front window features a colorful yellow and purple neon Ipso Facto sign, and a hand made riser with matching checkerboard floor supporting the two to three mannequin display. I create artsy fabric and laminate seasonal decorations for the window as well. Glass cases beacon with jewelry, leather accessories, music items, collectable statuary, and center racks hold more men’s and women’s apparel.
We just remodeled by adding an additional changing room decorated across the top with skull embroidered vinyl, repainting our long-loved coffin shaped mirror, making room for both a new corset floor display and adding wall space for coats.


Ted: What makes your store special?

Terri: Ipso Facto offers many unique items not found elsewhere, including some accessories and jewelry that I make. We are often the first place customers shop on their way to a club in Hollywood, as well as a popular source for gothic prom or wedding dresses. We are not shy about pulling out a tape measure to make sure the customer enters the dressing room with choices that will work for them, and offer a wide variety of scarce music items, which we happily preview for customers. I can’t talk about Ipso without mentioning what customers call the "Ipso smell." We sell hand dipped WIldberry incense which, without being burned, infuses all of our items with a sweet, rather exotic scent. People often confess that they don’t want to wash their purchases in order to keep the aroma intact.

Ted: What do you look for in a brand?

Terri: As a seamstress and former FIDM student I understand the importance of quality clothing construction and fabric when buying store merchandise. To meet the discriminating tastes of Ipso Facto customers, items must be unique with fashion forward style lines, hard wearing and flattering. Our offerings don’t necessary exclude color or prints, but black is naturally a staple color in the gothic, punk, alternative community. When we order from a supplier, we want to be assured that the items will arrive when needed, and appear as close as possible to the samples shown at the time ordered. Also keeping the price consistant is important for reorders due to our growing mail order/web business.


Lip Service is a line we have carried since our inception because they offer quality unique rock/punk/ goth male and female apparel at prices our customers can afford. They were among the first in the 1980s to offer eye-popping, stylish, wearable rock, punk, gothic apparel and have a huge following.

Shrine has an opulent, show-stopping look and is very popular with our gothic guys as well as celebrity musicians and television actors. Their fabrics are stunning and the fit is great too. Unique buttons , patches and closures on their clothing makes them wearable art pieces.

Alchemy has a loyal international fan base for their beautiful, well-made U.K. pewter goth and rock-inspired jewelry with current popular steampunk styles with moving parts and unusual rings that do consistantly well.

Tripp is a N.Y. brand whose men’s pants, coats and womenswear are phenominal sellers at Ipso Facto for their affordability, style and comfort. The line is known for its markedly individual designs and quality.

Living Dead Souls is one of our newer U.K. based lines that was an immediate hit with customers for their corsets, handbags, dresses and seperates in the gothic and rockabilly style.

Dead Threads, based in London, creates our most sought after mens’ pants and shirts, along with some very affordable and stylish womens apparel in gothic, lolita and retro looks.

Ape Leather are our suppliers for leather “bondage”collars, belts and wristbands. Their leather is genuine cowhide, hand cut and assembled..not the glued, pressed imported cheap material seen in mall stores. It will last a couple of decades of daily wear as our employees will attest.

Pleaser boots and shoes are some of the most affordable underground footwear available offering an amazing array of cutting edge, fun and sexy styles ranging from burlesque and retro to industrial platforms and gothic footwear for both men and women.

Ted: Describe popular styles or trends in your store.

Steampunk style incorporates Victorian aesthetics inspired by literature and film, such as bloomers and corsets for women and tail coats, top hats for men. Off the rack fashions are often complemented by do-it-yourself ingenuity with self-crafted accessories like mechanical wings or leather bound goggles as seen at the Labryth of Jareth or Steampunk ball annual events in Los Angeles.

Terri: Instead of having seasonal sales at Ipso Facto we always have sale bins with deeply discounted clothing from previous seasons in the $10 to $30 range, so that whenever a customer stops by (some drive a great distance) they have affordable options.
Current season apparel retails between $50 and $350, accessories are $20 -$90, and footwear runs $45 to $170.
Sizes are medium to XL for men and small- XL for women, with continued efforts to offer more plus sizes in the near future. Sizing varies from manufacturer to manufacturer so a tape measure is often needed to get a proper fit.

Ted: What is your average customer size?

Terri: Medium for women and large for men in clothing.

Ted: What does the average customer spend per visit to your store?

Ted: Describe your customer base.

Terri: Our clientel age range includes tween to forty year olds whose fashion and music tastes include gothic-industrial, punk, cyber, rockabilly, fetish, Lolita, Steampunk. Also we also see parents who are longtime loyal customers bringing their kids in for a first taste of alternative apparel..so our appeal is often multi-generational. With a University, several colleges and high school nearby, students figure largely into our customer mix. It’s not unusal to find us engaged in conversation with customers about current affairs, the latest viral video or video game, or a variety of normally taboo subjects as our customer base includes musicians, models, actors, exotic dancers, cross dressers. Our staff is colorful too. One of our employees does extra work on True Blood and other t.v. shows and films, another does voice-over work, and Bob and I are known for our visual art and musical endeavors.

Terri: At Ipso Facto we like to foster a “salon” like atmosphere where fashion, culture, history, art, current affairs and music intertwine and people can share ideas and love of fsashion and music. We learn a lot from our customers as well to keep abreast of what future trends and interests in regards to future offerings in our product mix.