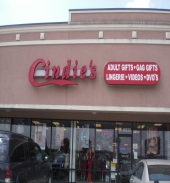 Greg: I’ve been in the industry for 17 years and have been best friends with Cindie’s owner Robert Hunter since we were 13. We opened our first store in Fort Worth, Texas in 1993. Six months later, we sold the location and relocated to Houston, opening our first store there in 1994. By 2003, we had eight stores. We are now up to 19 stores varying from 3,800 to 6,000 square feet. Cindie’s employs 135 people and up to 150 during the busy holiday season.

Ted: What makes your store special?

Greg: We have had to change and adapt over the years, and we’ve succeeded by focusing on providing excellent customer service to the women and men who walk in. There has been a shift from customers preferring throwaway products to customers choosing quality over price, and we’ve moved from a revolving door of one-time shoppers to establishing a core customer base who keep coming back to buy quality items at Cindie’s.

Ted: What brands are important to your store?

Greg: Cindie’s carries an incredibly wide selection of vendors, including the majors such as Shirley of Hollywood, Dreamgirl and Leg Avenue. The fastest growing lingerie lines are Baci and Seven ’til Midnight; the fastest growing dancewear lines are J. Valentine, Roma, BodyZone Apparel and Body Language; and, as far as toys, Lelo Products.

Ted: What are you looking for in a vendor?

Greg: Over the years I have cultivated actual relationships with these brands and remain loyal to them, rather than swapping them out for a smaller start-up brands with similar products to save a few bucks — we want to keep giving our customers what they want and work with brands that think outside the box. BodyZone was actually the first company to brand with Cindie’s. Ray Grdan, the owner of BodyZone, brought the idea to us many years before the competition. He set up the very first brand wall in Cindie’s, offering their thongs, shorts and G-strings at a great price. BodyZone is a core brand at Cindie’s today. Their ability to design, manufacture and market new products to their customer base is among the best in the business. We recently set up a wall with displays and signage promoting their new dress line, and when we got the dresses in, we sold out in the very first week we carried them. I told my store managers we couldn’t have sold them that fast, but they confirmed we did. It’s a basic idea that works really well, and it’s nice to work with forward-thinking people and an up-to-date brand.

Ted: Describe popular styles or trends in your store.

Greg: Trends differ from territory to territory — tastes and fashion in cities like Houston, Austin, Arlington, Portland and Anchorage are completely different. We rely on our excellent employees and managers to provide input and select styles that appeal to our customers in each area. We do carry a lot of classic lingerie styles that appeal to women across the board. Nearly 40 to 45 percent of the merchandise in each Cindie’s store is apparel, and we’ve been shifting away from boxed lingerie to nicer hanging styles, although boxed sets are still big sellers. We have also noticed a trend of more plus sizes in Alaska.

Ted: Describe your customer base.

Greg: Practically before anybody else in the industry, we recognized the importance of being female-friendly. Women are Cindie’s core customers. When we first opened, we were laughed at by adult retail stores, as we worked hard to attract women and keep our stores geared more toward lingerie, dancewear, shoes and hosiery — less than 4 percent of our merchandise is adult DVDs and videos. When the adult DVD market tanked, the stores that had laughed at us were forced to revamp their layouts, but Cindie’s was ahead of the curve. Even as laws regarding the sale of adult toys and media have become more lenient, Cindie’s stores have maintained a female-friendly boutique footprint. Not one of our locations has an adult license, and we work with city ordinances to make sure we have the right product mix so we can open in nice neighborhoods.

Greg: We would like to open at least 12 to 15 more locations at the rate of one to two a year, maybe more. We are currently looking to expand into several other markets in Texas, Louisiana, Oregon, Alaska and beyond. The building process is underway in many locations.