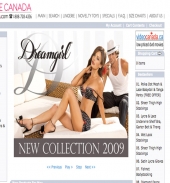 Five years ago, E-V Productions Inc. decided to expand beyond the adult DVD and novelty toys niche of its e-commerce website: SexToysCanada.com. In 2004, the Canadian online retailer added lingerie, changing the website's name to the more fitting LingerieCanada.com.

"Back in 1998, we were doing home parties and carried the Coquette line, but when we moved online in 2001 we stopped carrying lingerie because of supply concerns," the company's president, Nish Thakrar, explained. "After three years of research and meeting contacts in the industry we started to introduce lingerie to our customers." He reported that, since inception, E-V Productions' sales have grown approximately 12 percent per year.

The company houses a staff of eight full-time and two-part time employees, who attend the AVN, ANE and ILS tradeshows annually.

The site also carries men's intimates by Zakk and Gyzz, as well as Shirley and Dreamgirl's men's lines, and will be adding Greg Homme's merchandise shortly.

Sizes and prices are just as varied: they run from S to 3X/4X, and approximately $3.95 to $100, respectively. Lingerie runs to gamut of styles: from to corsets to sexy costumes to hosiery, and everything in between.

Although according to Thakrar, bras are not a big part of their merchandise, LingerieCanada is considering expanding on this category by adding bras by Triumph to their line-up.

In spite of the poor economy, Thakrar said they are doing the opposite of phasing out brands, adding: "We are looking to carry more brands and more variety."

Perhaps because of their large selection, Thakrar could not pinpoint a specific customer age, size or gender, although he believes that the majority of clientele are middle-to-upper class. He estimated that the typical customer spends approximately $80 per visit, with most popular items being sexy costumes and hosiery.

LingerieCanada keeps customers coming back for more by offering a user-friendly, well-respected, safe and secure site without pop-ups. To beat the competition, which Thakrar said "is everywhere on the Internet," they often hold sales promotions, and continually strive to keep prices lower and customer service better than the competitions'."

To keep sales up despite the recession, they also advertise online frequently.

Thakrar added that the fact that they are based in Canada makes for speedy deliveries. All merchandise is shipped out of the company's 6,000-square-foot warehouse in Montreal, which means no "custom hassles."