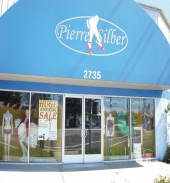 Pierre Silber's total number of stores depends on the time of year.

Owned by father and son Pierre and David Silber, the retailer runs a year-round 18,000-square-foot store in Santa Clara, California and an e-commerce website, both carrying sexy costumes, dancewear, shoes and more.

Every Halloween season, Pierre Silber costume stores ranging from 2,500 to 5,000-square-feet pop up in California's bay area. During last year's season there were five, and this year they plan on opening about seven. Year-round, the retailer employs about 15 people, and when the seasonal stores open, that number grows to between 60 and 80 employees.

Although Pierre Silber started as a sexy shoe retailer many years ago, Pierre and David founded the company as it is today in 1997. Pierre, with his background in retail, took on the retail side, while David, a former college football player, handles marketing and the website. Both handle buying for all new product lines. Pierre's wife, who still works with the company, works on the financial side. But despite their designated areas of expertise, they shy away from position titles, saying: "we just do what we do."

"Doing what they do" still falls in line with their original goal: finding customers everything they could possibly want. Last year's Halloween season, they carried 700 men, women and tween's costume styles, and 500 in the sexy category alone ranging from $29 to $50. A total of 12 vendors included Leg Avenue, Dreamgirl, Forplay, Rubie's and Roma.

They also offer sizes XS to 4X, with over 200 plus-size costume styles in the store and more online. Shoes by Ellie and Pleaser run up to size 16.

Unlike many sexy/costume shops, Pierre Silber allows customers to try on everything, and to accommodate this, has 15 to 20 dressing rooms per store. Employees work to take each customer from start to finish and dress them in everything they need to complement their outfit: from shoes to handbags to wigs.

The company's year-round customer base includes dancers, couples and transvestites, and during the Halloween season, it includes young women and mature couples.

David and Pierre cited sailor costumes as last year's top-sellers, and they predict a resurgence of the pin-up this year.

In addition to "great customer service," David and Pierre believe a key to their success is their mutually supportive relationships with vendors. In addition to being some of their most popular brands, David and Pierre named Jelly swimwear, Leg Avenue, Chica Rica, Forplay, Roma, Dreamgirl, and Ellie shoes as some of the vendors they work well with, adding about Ellie: "[they] are a very honest company that has been very good to us." They have not had to cut any vendors due to a positive Halloween season in 2008.


To have your company considered for the BODY BEST RETAILER award, and to have your store or retail web site profiled here, and to be linked to the BODY web site, Fill Online Form or download the form here. Once you fill out the form, email to ted@fmmg.com
Contact Information: (718)676-4444
Copyright © 2022 Fashion Market Magazine Group, Inc. All rights reserved.
All photos Copyright © 2000-2022 Nick Monjo & Fashion Market Magazine Group. All rights reserved.
Please email any website related issues to bodymagazinefmmg@gmail.com