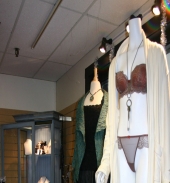 For a store that opened just a few months shy of the economic crisis, Larks & Nightingales, the New London, New Hampshire-based sleepwear, loungewear, and lingerie boutique, is doing quite well, according to proprietor Diane Moore. Moore attributes this to the pampering quality of a nice piece of lingerie, which women are particularly attracted to when times are tough.

"People come in wanting something pretty because they just want a little pick me up," Moore said.

Since she opened in June, Moore has put advertisements in local newspapers and magazines, and has participated in interviews on local television. The television advertising seems to be helping to boost business. Just recently, Moore did local television interview, and a woman claiming she saw her on TV dropped in and spent $400.

Larks and Nightingales success is also most likely due to Moore's product versatility. She carries everything from the really pretty, sexy lingerie, to cozy PJs to comfortable bras and sleepwear made from cool bamboo material, and her 18 current fashion lines include Vera Wang, Hanky Panky, Sassybax, and Nfini Shapewear. Her most popular items this year have been the Le Mystere Lace Tisha bra for $74 and the Hanky Panky thong for $18. She thinks these items are particularly popular because "they are both very comfortable and very sexy." She has a large range of prices, which includes a line catering to younger women running from about $30 -$60, and a line for middle aged women with bras for up to $100 and robes and loungewear for up $150.

She also carries bra sizes from 30A-48J, in the hopes of catering to women of all shapes and sizes. She tries to always have in stock products for older ladies and plus size ladies, her rationale being, "Anybody can feel pretty and sexy."

Attracting plus size and elderly customers is proving to be a challenge, however; the vast majority of her customer-base ranges from ages 12-60 and tends to be on the slender side. She often fits adolescent girls for their first bras, saying that the girls seem to feel comfortable with her on this often-embarrassing rite of passage. She hopes by marketing to all women and continuing to carry a vast range of sizes she will see a growth in elderly and plus size shoppers. She also gets the men coming in for gifts for their girlfriends and wives.

Moore also benefits from the tourists who frequent the picturesque New England town all year round, and the population of local college students. The younger women tend to buy the more affordable items, while the middle-aged women are more interested in higher-priced, fine lingerie.

"I have a good market for both price ranges, " Moore said.

Moore, who was a healthcare worker in her native UK, fell into retail after moving to the United States 7 years ago, where her healthcare expertise did not fit with the American system. She started working part-time selling sleepwear and lingerie at a local New London store, and bought Lark's and Nightingale's after her plans to buy the store she was working in fell through.

This spring 2009 she will expand her product stock to swimwear.

To have your company considered for the BODY BEST RETAILER award, and to have your store or retail web site profiled here, and to be linked to the BODY web site, Fill Online Form or download the form here. Once you fill out the form, email to ted@fmmg.com
Contact Information: (718)676-4444
Copyright © 2020 Fashion Market Magazine Group, Inc. All rights reserved.
All photos Copyright © 2000-2020 Nick Monjo & Fashion Market Magazine Group. All rights reserved.
Please email any website related issues to bodymagazinefmmg@gmail.com