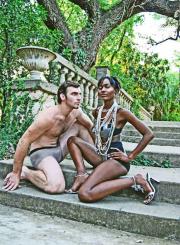 The short boxer brief comes in shades of black, nude and red, and is made from moisture-wicking Poly-Spandex produced in California. It wholesales at $24 for a suggested retail price of $52, and Summerville expects it to ship in October. Sizes range from S through XL.

Summerville expects the boxer brief to appeal to physically active men aged 22 to 38, saying about the fabric "it moves with the body, and has great stretch properties." It also includes center front seaming that she reported, "naturally adds more lift," by utilizing the same breast-lift science used in Sew Sister's bras.

Summerville was inspired to go in the men's intimates direction by her husband, a frequent back-packer. "He was always coming home from trips complaining that his underwear was not drying as quickly as he wanted it to," she explained. He and some male cyclists test-wore the underwear while in production. "They said it was for so comfortable they couldn't feel it," Summerville said.

She expects men's activewear stores to pick up the underwear, adding that she hopes that her current lingerie retail customers, who mostly cater to women, will consider adding the style as "something special for women to pick up for their boyfriends and husbands."

At the July 16th event, Sew Sister will also introduce the Mellie G. basics collection consisting of a bustier, merry widow, bra, bloomer, high-waisted panty and thong wholesaling from $53 for the thong to $324 for the bustier. Sizes run from S through XL for bottoms, 34B through 36C for the bustier and 28A through 48FF for the bra. Made mainly from silk charmeuse, she described the collection as having a sporty and refined feel.

Sew Sister can be found at lingerie and mastectomy apparel boutiques nationwide including Couleur in Shreveport, LA., Underwear in Austin, Tex. and De La Brassiere in Cedar Park, Tex. For further information, call (512) 922-6843, or e-mail Summerville at Megan@SewSister.com.