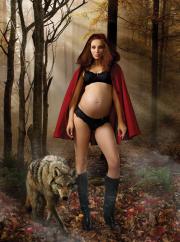 (Filed Under wholesale Maternity News). New Zealand-based HOTmilk Lingerie has launched a new collection based on fantasy and fairy tales that is being promoted through a campaign that promises to push the boundaries of traditional pregnancy and nursing lingerie.

The collection's campaign features models in fairy tale settings dressed in the company's sexy maternity lingerie. Of particular note are the Rapunzel and Little Red Riding Hood shots, which show off two frilly and feminine bra and panty sets designed by the company that are not only appealing, but also functional and provide for discreet feeding and comfort.

Featuring royal purples and crimsons, silky satins and lace, the new "1-10" collection is self-described as sexy, sophisticated and sensual.

According to a company spokesperson, "HOTmilk's philosophy is to empower women, and in recognizing that pregnancy and being a new mother can be a challenging time in a woman's life, the designers have created feminine, sensual garments which enable you to believe fairy tales do come true."

Sizes range between 30A through 42G for bras, and bottoms and nightwear are available in S through XL.

Currently, the company only works with independent lingerie and maternity boutiques. "These boutiques are fabulous and where our heart is," said Lisa Ebbing of HOTmilk. "We [are in stores] like My Intimacy and the Pump Station in Los Angeles. We [are in] 40 stores around the country, but will need at least 200 to have coverage [in the U.S.]."

HOTmilk will be showing at CurveNY and NV this year. In addition to lingerie, the company will also show sleepwear.