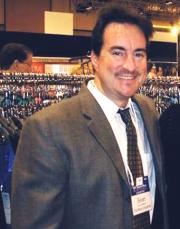 Monahan would not elaborate on the reasons behind this decision, but did say it was "mutual" and was positive with his comments regarding his former employer. "Fantasy should become a greater presence in this industry in the years to come," he said. "I wish Mike [Savage] and the rest of the Fantasy team the very best of luck and a very successful future."

Monahan said he was instrumental in launching Fantasy's Sexy Costume collection, as well as their private label division, where he developed programs for chain stores, among others.