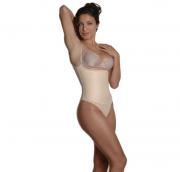 (Filed Under wholesale Shapewear News). Thiago Pasos only acquired his position as Squeem Corporation's vice president of marketing a little over a year ago, but is already repositioning the company for more growth.

Having previously served as marketing consultant for the company's subsidiary, Esbelt, in Lisbon, Portugal, Pasos is now working with Squeem and aiding in the launch of its newest shapewear, entitled Sexy Body.

According to Pasos, Sexy Body, which is offered in two silhouettes: a panty and a thong, is the company's attempt at reaching out to a younger market.

Although the fact that the silhouettes are flattering and shave away two inches off of the body instantly is quite impressive, the most interesting aspect about Sexy Body is the fabric in which it is made: a cotton/rubber blend in which the cotton serves as lining for the rubber, so it never comes in contact with the skin.

All of Squeem's products are made from this cotton/rubber blend, a technological advance the company achieved through many years of research in Brazil. Since he entered into the company, Pasos pushed the development team to come up with a sophisticated upgrade in the rubber with the intent of creating a different texture. Now, Pasos says the texture has even been compared to what silk feels like to the touch.

Pasos adds that the shapewear adapts to the body's movement resulting in a “micromassage” that has the same effects as lymphatic drainage, which aids in the elimination of liquids. “It is a very versatile and functional product,” he said. Additionally, Pasos says it helps to improve posture and believes the fabric's health benefits will aid the company in reaching “the next level.”

The company's initial strategy was to stick with specialty stores and its products are now available at over 800 locations nationwide and over 200 websites, but with Sexy Body along with the new innovative fabric, Pasos is hoping to tap into the department store market. He said it is a main focus for him to reach the larger department stores and a wider variety of customers with this launch, which is scheduled for May.

Pasos says he believes Sexy Body will have record-breaking sales.