To receive more info from Shapeez about a particular product, Click on the photo (photo will enlarge). 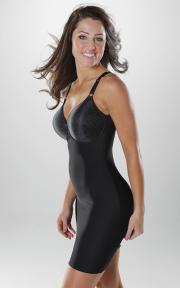 (Filed Under wholesale Shapewear News). Shapeez, the bra company that is known for back smoothing bras reported two successful introductions during the 2013 holiday season: the Sportee sports bra (which has been covered previously in BODY) and the Tankee Slip. Both have already proved highly successful according to the company.

“The Tankee Slip is a medium control shaping slip undergarment with a built-in back smoothing bra that lifts, shapes and supports the breasts while seamlessly slimming and smoothing the torso,” explained designer and company founder Staci Berner. “It was designed to be worn under skirts and dresses, but the garment is so versatile, some of our customers tell us they can make a complete two piece outfit simply by combining the black version with their own top. Looks just like a skirt and top and they get the benefit of not having to layer so many pieces to get the sleek look they are looking for. By having the bra built into the slip, it gives the wearer a smooth seamless look from the top down.”

“A key difference with our slip is that it was designed with a slight A-line hem which keeps the body of the garment from rolling up when the wearer moves throughout the day.” This “shaping slip” comes with adjustable straps and is made of “moisture wicking cool tex fabric that is extremely comfortable to wear,” said Staci Berner.

“Normally it takes 3 to 6 months get uptake on new product introductions,” said David Berner. “But clients are clamoring for the sports bra and slip. These two garments really shot out of the gate, and the initial production runs were sold-out.”

One of the reasons for the rapid introduction, he continued, is that the Tankee Slip was the product of retailer requests. “We have a lot of stores throughout the U.S. and Canada, and a lot of them wanted something longer to wear with dresses. That extended all the way down. And they just love our product.”

All can be seen on the company’s website, Shapeeze.com, which also has an interesting series of unretouched photos showing the backs of actual consumers (bra - induced back bulges prominent) and after (no bulges) putting on Shapeez products.