To receive more info from Coobie about a particular product, Click on the photo (photo will enlarge). 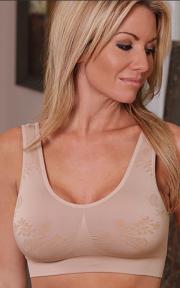 (Filed Under wholesale Lingerie News). Building on the increasing success of its seamless bras, Coobie has dramatically expanded, adding both new bra styles and launching an extensive new leg wear division. The result is an emerging, moderately-priced “comfort brand” that spans several categories of apparel.

Envy, a new label for the company, offers “Super Opaque Leggings,” “Ultra Leggings,” tights and “superior no show” footies to wear under moccasins. In the bra arena, where the company already had offered many styles, there is a new “Lace Coverage Bra” (which adds a band of lace in the cleavage), a new “Lace Back Bandeau” bra, new styles of the Lace Comfort Bra and a new “Floral Comfort Bra.” There is also a new “Padded V-neck Lace Trim Camisole” and a collection of “Coobie Ankle Leggings” (which are in addition to the new Envy legging styles). The new offerings are summarized in two new catalogs the firm began distributing to buyers at the recent Magic show in Las Vegas.

Asked why so many new products over the past few months, spokeswoman Jordan Horvath explained, “It’s always nice to bringing fresh new things to keep customers interested.” Company executives have been “looking at the market in general, seeing what people are buying” and coming up with new items that “improve” on the choices already in the market, she continued. “A lot of it is consumer demand, their feedback.”

The new tights come in three varieties: sheet, fashion and textured. The sheers are sold in a two pack (one sheer patterned and one solid sheet) which wholesales for $12, with a suggested retail of $24 to $26. There are three designs, all black/black.

The fashion pattern tights are sold in two-packs that include one fashion pattern and one opaque, with a wholesale price of $12 and a suggested retail of $24 to $26. There are six designer patterns, with the colors black/black and slate/slate.

The textured tights are sold in a two pack, one texture and one opaque, with the wholesale price of $13 and a suggested retail of $26 to $30. There are three textures and three color versions: black/black, espresso/espresso and slate/slate.

The “Padded, V-neck Lace Trim Camisole” wholesales for $10 with a suggested retail price of $22. It is offered in white, black, ivory, nude, charcoal, espresso, pomegranate and sea foam.