To receive more info from Felina about a particular product, Click on the photo (photo will enlarge). 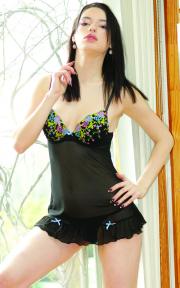 (Filed Under wholesale Lingerie News). Body Jewels, the “young, fresh and lively” new collection from the same group that owns Felina, will ship “at the end of April” to various stores around the country according to Willy Mrasek, creative director. “JCP along with another major retailer [are] bringing it in under their private label brand. (We feel this flexibility adds to the appeal especially for those accounts wanting their own brand represented but not wanting to commit to their own MOQ’s [minimum order quantities]).”

While the trademark has been in Felina’s possession for a while, this is the first significant use. “We secured the brand name as part of a package from the original Jezebel that we acquired in 2003,” explained Mrasek. “The original Body Jewels was a collection driven concept of Jezebel offering bright fashionable colors. Which back then was a very limited offering in the intimates market. In 2012 Robert Zarabi, president/CEO pulled [the] Body Jewels name out of retirement as he felt the time was right to reinterpret the original concept of Body Jewels and re-launch as its own brand and lifestyle, perfect for today’s fashionable market who are price conscious.”

Examples of other stores that have bought the collection, which was first shown in August, 2012, include Camouflage in Santa Cruz, CA and Utopia on Long Island, NY.

The line sheet contains eight groups: Chelseal Floral, (5 silhouettes including a babydoll, two bras and two panties in a floral print); Ginger (a bra and two panties in black gingham with yellow accents); Lauren (a bra, a cheeky panty and a thong in five shades of “geometric galloon lace”); Rachel (a push up, a hotshort and a babydoll in black or pink and yellow allover floral lace); Angie (a babydoll, bra and a hipster in floral embroidered black stretch mesh); Samantha (two bras, a hipster and a bikini panty in three shades of microfiber shadow stripe with lace); Natalie (a bra and a cheeky panty in pink or leopard microfiber with galloon crossdyed lace); and Chelsea Dot (a babydoll, bra and thong in blue with white polka dot printed stretch mesh with galloon lace).

“With the current state of fashion and intimates, we find Body Jewels hanging with any of the fashion savvy brands out there in both intimates and RTW regardless of their retails,” said Mrasek. “From Betsey Johnson intimates and Honeydew to H & M and Topshop. It’s not about the price but the first impression on the fixtures. We were surprised by the initial reaction from some key accounts and their positive response to the line being that it was far below the price points they normally look at.”

And why does the world need another brand? “We are capturing a missed opportunity for several specialty and major retailers out there to bring in quality, competitive price points who are looking for fun, fast fashion to round out their assortments. Core fabrications in key silhouettes offers a complete assortment with mass appeal while maintaining a market niche perspective,” explained the creative director.

“Our little motto is: Young, fresh and lively styles you love at prices you will treasure,” he concluded. We liked the collection so well we put Angie on the cover of the April issue of BODY.