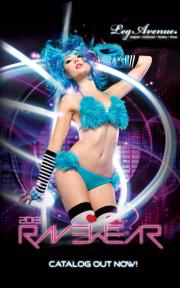 (Filed Under wholesale Lingerie News). For those retailers wondering if rave is still a strong trend in the market, another endorsement: the 2013 Leg Avenue Ravewear collection, which will be shown for the first time at the upcoming International Lingerie Show in Las Vegas in April.

And you don’t have to take just Leg Avenue’s word for it. There’s plenty of other evidence. Recently Espiral released its 2013 collection and made a special point of emphasizing its black-light-reactive rave collection. Earlier this year Yandy.com, already a retailer of rave apparel from most of the leading suppliers, released its own low-priced Yandy Candy rave collection. (Interpret this as a retailer spotting a trend so hot that it decided to invest in creating its own brand, even though many others were already available). Dreamgirl’s introduction of “hot bright” colors to its collections last year can be seen as an acknowledgement of the power of rave. When his company added the rave-associated shades, CEO Christopher Scharff spoke of “a new approach for Dreamgirl to entice younger, hipper consumers to the brand. The product line has an array of innovative details that play up the vibrant color story and daring styling for a new generation of consumer.” Even Rubies is emphasizing the furry animal hoods that are a part of the rave trend.

Leg Avenue is not only adding new rave styles, but is publishing a complete new Ravewear catalog for 2013. Some of the styles are shown here for the first time, exclusively, by BODY. “As with the previous collection, the line features vibrant colors and fun designs that really embody the atmosphere at raves!” said Lisa Griffin, Leg Avenue’s marketing manager. She added, “The suggested retail prices for the collection range from $12 to $35, with retail prices for accessories starting at $5.00.”