To receive more info from Barbara about a particular product, Click on the photo (photo will enlarge). 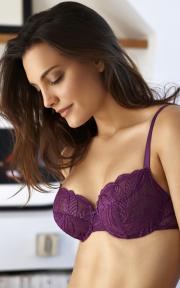 (Filed Under wholesale Lingerie News). “The big news is that Barbara is entering El Corte Inglés big time, in Spain,” Hubert Lafont, directeur general, wrote BODY in an e-mail today. “We start with 10 stores, but they add one per month.” The news is significant because Barbara has been seeking to break back into U.S. department stores, and El Corte Inglés S.A. (or ECI) which translates to “the English cut” is not only the largest department store group in Spain, but also in Europe. It is the fourth largest group in the world with sales of €15.8 billion (about $21 billion) in 2011.

Barbara used to be in major stores here, but is not in any currently. Saks used to sell the brand, for example, according to Cindy Kelly of CMK Distinctive Brands, the firm that now distributes the line in the U.S. But that was before an absence from this market of at least three years which coincided with two separate financial reorganizations of the company, which is based in France.

ECI has about 80 stores in Spain, and a successful expansion of Barbara, which is beginning now, might help convince the big stores here that it is time to bring the label, which has an 85-year history in France, back. So far, CMK has focused on getting Barbara into online stores such as Herroom.com, Bareweb.com and BraSmyth.com.

“The strategy of being online first has really worked because of the reach these guys have,” explained Kelly, speaking of the ability of the web stores to bring the Barbara name and images directly in front of a large number of consumers in the U.S. At the same time, Kelly has sold Barbara into a number of specialty stores here such as Nancy Meyer in Seattle, Oh Baby in Portland and the Bra Smyth physical stores in New York.

The newly designed Barbara lingerie is helping in the fight to expand in the U.S. “They have a niche of really focusing on stretch laces,” said Kelly. “It is a really opulent product, that women can wear every day, and that is different than the smooth products” available from other luxury brands. The stretch lace can seem uncomfortable or unsmooth before it is worn, said Kelly. But once a consumer puts it on, and “they wrap their minds around” the stretch lace concept, “the comfort sells itself. This is a really great kind of niche.”

On the Bra Smyth web site the Legende Minimizer Bra was recently retailing for $89 and the matching panty was $49. The Legende Bodysuit was $175 and the Perfect Control Panty was $97. Other bras ranged from $96 to $104 and various panties from $48 to $79.