To receive more info from Rosch about a particular product, Click on the photo (photo will enlarge). 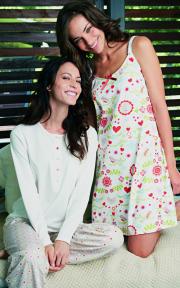 (Filed Under wholesale Sleepwear News). Gerhard Rösch GmbH, the German sleep, lounge and intimates producer, is introducing a luxury organic silk collection, a men’s collection for the international market and a new kids line, and will bring these and other new styles to an expanded trade show schedule which includes appearances at the Salon International de la Lingerie in Paris and at both Curve shows in the U.S. over the next six weeks.

The 2013 collection with the most elaborate back story has to be Féraud Paris “Organic Silk” which, according to the company’s press release, “has been certified with the GOTS (Global Organic Textile Standard.) The GOTS certificate means transparency, environmentally sustainable production and acceptable working conditions. All steps in production, from the silk manufacturers to the deliverers, are carried out in harmony with the environment and the workers. The silkworms are fed with organically grown mulberry leaves from Sichuan Province in China. We use absolutely no synthetic fibers or rubber – instead we used fine rubber and pure wool. The silk is only taken from workers who are at peace with themselves and the environment around them – i.e. workers who are free from all stress factors. In addition, the workers in China also receive an above-average salary as well as well-paid overtime, thus acting as a model for fair and sustainable production in China.”

The expanded men’s collection will be available in July, as a “small, compact men’s collection with four themes (basic, horizontal-striped, diamond-pattern and silk),” according to the company release. “With V-neck and round-neck tops and dressing gowns, the models in our basic range can be combined with all items in the collection and guarantee effective presentation at the point of sale. A multi-color top with horizontal stripes has been created in coordination with the female collection and therefore ensures a flowing transition between both ranges.” Fabrications include “interlock, elastic single, single jersey and pure silk,” according to the company.

Papamut by Rösch, the new kids label, “offers unique lifestyle T-shirts” with long sleeves “with an outdoors style [that] can be worn perfectly with jeans and even indoors!” according to the company. “The comfortable single jersey model, made from 100 per cent wool, ensures the highest level of comfort. The T-shirts are ideal for any activity.” Prices have not been set.

The “healthy sleep initiative” from the Rösch Creative Culture night wear collection provides another elaborate back story for retailers to present to their customers. “The concept has three core ideas, which the customers can evaluate themselves or with the help of a trained team of experts,” according to the Rösch press materials. “By analyzing sleeping habits alongside room temperature and the bed sheets used, it is possible to create a clearly defined table, which will allow customers to choose the most appropriate type of night wear. A nightdress and a set of pyjamas are offered in six different forms depending on the individual’s sleep type. Extensive tests have been specially carried out by the Hohenstein Institute in Bönnigheim and tailored to our products. In order to ensure optimal product presentation at the point of sale, Rösch has created its own hang tag and product displays. The products are presented in a standard format and are appealing due to their clearly defined function. Choosing the right Rösch night wear is easy, because the product displays, which have been specially adapted to warmer or cooler environments and the level of perspiration, immediately show the customers which model is best for them.

Also new from Rösch in early 2013 will be a new loungwear collection from Féraud designed to look as if it can (or actually can) be worn outside; and a “comprehensive range of mix and match opportunities with night wear and lounge wear” from Blanche Fleur.

The company is also offering, from April 2013, extended delivery deadlines for all brands in the Rösch Group. “The four delivery periods for the main collection for the autumn/winter season 2013 will begin in July and last up till October. NEW: the trade fair range will be delivered in April, the pre-collection in June and the Christmas series from 1st October 2013.”

Overall, Rösch seems intent on increasing its presence in this country, noting that it “will be cutting back on its presence at the regional trade fairs in Germany” and putting more emphasis on the U.S. shows.