To receive more info from Unico about a particular product, Click on the photo (photo will enlarge). 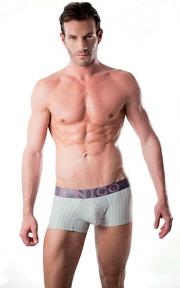 (Filed Under wholesale Men's Underwear News). Mundo Unico has introduced a new Volcano line of men’s underwear, containing 40 new styles as well as two new swim briefs. “This collection is hot, hot, hot and will sizzle your body with sexy, fun and eye catching designs,” wrote general manager Olga Lucia Oggioni in a recent e-mail message. The bold, bright Colombian-made brand is handled in the U.S. from offices in Miami.

The collection is produced “in a mix of cotton and micro fiber blends,” explained Oggioni. “A special holiday group of boxer briefs will highlight the celebrations for this season with Caldrea (Santa Red), Fragmento (pine tree green), Vapor (snow flake white) and Humo (midnight black)” all of which will make “perfect gifts.” She added, “Volcano will blow up and melt you away in steamy fashion!!!”

Unico is widely distributed in U.S. specialty stores and in online market. Prices are moderate. Recently, on the Freshpair.com web site, retail prices for previous collections of Unico underwear ranged from $11.25 for the “Hero T-Thong” and $12.75 for the “Epoca Brief” on up to $23.25 for the “Numeral Trunk.” At the Skiviez.com web store retail prices ranged from $17.50 for the Unico jock strap and $19 for the “Caribbean Bikini” on up to $32 for the “Long Athletic Boxer.”