To receive more info from Les Affaires about a particular product, Click on the photo (photo will enlarge). 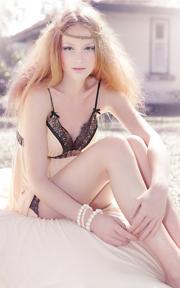 (Filed Under wholesale Sleepwear News). Les Affaires was exhibiting again at CurveNY, with its large, “French-inspired” collection that centers around sleepwear, but extends to dresses, camisoles and other pieces that “complement seamlessly with the rest of your wardrobe” according to the company website. What’s interesting about this firm is that it is part of a much larger, publicly traded apparel and textile firm, GLG Corp. Ltd, which had sales of $129 million for the six months ended December 31, 2011.

Catherine Yam, vice president, brands at Escala Fashion Pte. Ltd. (Les Affaires’ immediate parent within GLG) told us at CurveNY that the apparel producer “wanted to do the brand” because of the firm’s “capabilities in design” and because it believed it could carve out a place “in the niche market for sleepwear and lounge.” She added that the company felt “there was too much competition in ready-to-wear” and so decided to focus on sleepwear instead.

The feel of Les Affaires is mostly conservative, classy, feminine and missy -- but there are some younger, sexier pieces as well. Colors are often muted, with lots of soft pinks and blues. Very often there is some degree of lace trim. Fabrications include: 60% cotton 40% modal jersey, rayon jersey, bamboo jersey, 95% modal 5% spandex jersey, 75% cotton 25% poly velour, 96% rayon 4% spandex jersey, and Tencel wool blends.

As might be expected from such a large producer, there is an extensive variety of silhouettes, and some 20 collections are shown each year, according to Yam. There are long and short gowns, robes, long and short pants, camisoles, tanks, capris, wraps, cardigans, jackets, mini dresses, maxi dresses, rompers and accessories. Most of the wholesale prices range between $29 and $85. At the Curve show, Yam showed us a lace trimmed camisole top with baby doll flare in a bamboo, modal and spandex blend with a landed, duty-paid wholesale price of $29. A group of Tencel, wool and spandex tops were $36. A long rayon and spandex gown wholesales for $72.

Les Affaires is already sold in several specialty stores in the U.S., said Yam, including Top Drawer, Liana Jane in Manhattan and Creative Aspire in New Jersey. Besides the U.S. a “main target” for the brand is the Asian market.

GLG was founded in 1977 and when it went public on the Australian ASX exchange in December, 2005 the company noted in a press release that was “a leading supplier of casual quality knitwear to customers including Wal-Mart, Macy’s, Aeropostale, Target and Sears Holdings Corp.,” some of which, Yam acknowledged, are still customers today. The firm produces garments in several Asian countries for men, women and kids.

In other news, Yam said the company was about to open a U.S. office at 112 West 34th Street in Manhattan, and will also open its second Les Affaires retail shop in Singapore in October. That joins the first 800-square-foot shop the company opened in that city in April, 2011