To receive more info from Farr West about a particular product, Click on the photo (photo will enlarge). 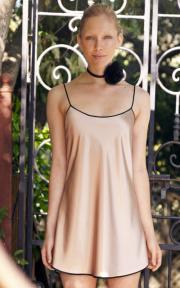 “The Sophia Collection has the vintage-inspired, subtly sexy styling that Farr West customers have come to know and love,” explained Farr. “However, this group represents a new take on our classic satin and lace slips. The edgy touch of the black trim combined with the subtlety of the nude body, really pops the entire look for a trendy wear-alone cami or slip dress, or layering pieces like the half slip and tap pant. And, since each item is made with our signature anti-cling satin charmeuse (with an added 4% lycra stretch!), and [is] based on some of our best-selling designs (but updated for a more contemporary fit), these pieces will fit beautifully and layer seamlessly under this season’s see-through styles.”

According to this sales and marketing executive, the “target customer is the 25 to 45-year-old modern woman who wants beautiful and classic lingerie that makes her feel good in her own body (no shapers for us!) and will work with her wardrobe through every aspect of her busy day from office wear to sleepwear and everything in between.”

The Sophia Collection ranges in size from XS to XL and is made, as all Farr West garments are, “at our factory in Watsonville, CA,” from where the line also ships. Turnaround time on orders is about a week.

Farr noted that the Sophia line currently is currently “only available on our web site (www.farrwest.com), however there are a few boutiques around the country where it will be available soon.” According to the company’s web site, Farr West is available in “Bloomingdale’s, Lord & Taylor, Nordstrom and 250+ women’s lingerie specialty stores nationwide.” The firm was founded in 1968 by Jack and Iris Farr.