To receive more info from Escanté about a particular product, Click on the photo (photo will enlarge). 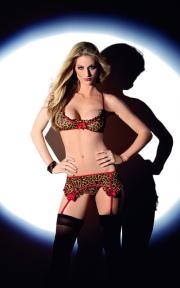 (Filed Under wholesale Lingerie News). Escanté is in the process of extensively redesigning its various intimates collections, as well as upgrading the packaging for its four-year-old bedroom costume and lingerie line, Dulce Caliente.

BODY was given an exclusive first look at some of the new Dulce Caliente styles (see accompanying photos) and discussed the recent changes with Rie Tamaki, the company’s new designer. “We have completely changed the packaging to have a bold and modern look, with a clean black and white spotlight effect,” said Tamaki of the new Dulce Caliente imagery. “Until last year, we used a paper box, this year we changed it to a clear vinyl bag which lays flatter on the wall hangers for retailers and are sturdier. It won’t have issues of the box ripping when customers open and look at the products. My goal was to design for women to be confident, sexy, edgy, sassy, which I think this new packaging really defines.”

The designer added that one way of looking at it is, “Escanté is putting a new SPOTLIGHT on their new package line, Dulce Caliente....” Another innovation is the addition of QR codes (matrix barcodes similar to those that can be seen throughout the photo pages of BODY) to the packages, that “takes you to a video link of the garment. This lets us share with the end consumer what photos could not express: front, side, back views with more detail and movement.”

Tamaki described the Dulce Caliente customer as “confident, seductive, sensual and full of imagination. She likes to be spontaneous and adventurous. She likes to feel sexy whether or not she’s with someone or alone.” Likewise, when comparing the new line to the existing Escanté label, “Dulce Caliente is sexier and hotter, just like it’s name,” said Tamaki. “It is a sexy, seductive line for the imaginative and romantic. [The label contains] lingerie and costumes that are lower in price than Escanté,” and the label is composed mostly of full sets, and only a “couple of panties.”

For “lingerie/costume sets,” retail prices for Dulce Caliente range from $15 to $32, with the panties at $10 to $11. By comparison, the retail prices for the Escanté label range from $22 to $65 for babydolls, chemises, bustiers and teddy sets, while “Escanté’s garter belts alone retail from $13 to $24” said Tamaki.

“The number of SKU’s are different every year but the new Dulce will carry 60 plus styles. They are one-size- fits-most,” explained the designer. “Our Escanté line carries approximately 495 SKU’s, and there are approximately 130 SKU’s” in the company’s Tesa line of corsets.