To receive more info from Carrie Amber about a particular product, Click on the photo (photo will enlarge).

A look from Seven ’til Midnight.

Added: Jun 2012
A look from the bridal collection. 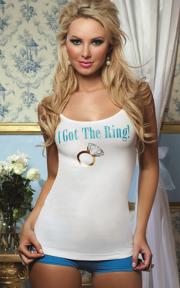 (Filed Under wholesale Lingerie News). Seven ‘til Midnight, a division of Carrie Amber Intimates Inc., the lingerie and costume wholesaler, is expanding its bridal collection with a thong set and new camis.

The new “I Thee Wed” thong set (STM-9562P) comes as a pair (one size only) packaged in the company’s new “go-go” bag. The tiny, closable, vinyl bag features a color picture of the items on the front. One thongs is black with white trim that reads “Property of the Groom;” the other is a white with blue lettering that reads “Just Married” with diamond ring detailing. The set wholesales for $6 with a recommended retail price of $15.

One of the new bridal cami’s is printed with “Property of the Groom” (STM-9561P), the other with “I Got the Ring” (STM-9560P). Both come in only one size, feature adjustable straps and are available in black or white. Each wholesales for $8 with a suggested retail of $20.

A spokesperson calls the new additions, “sure to be a hit for gift buying for bachelorette parties or other pre-wedding festivities.”