To receive more info from Fashion Forms about a particular product, Click on the photo (photo will enlarge). 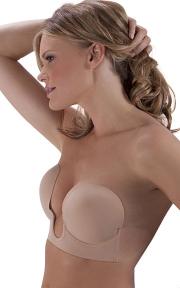 (Filed Under wholesale Lingerie News). Fashion Forms continues to introduce many new products to meet the varied needs of its growing list of customers, both among the retail community and among consumers.

At the most recent two Curve shows (in Las Vegas and New York) the company introduced seven new bras. That’s more than some companies have in their entire catalog. The new bras join approximately 200 speciality/solution bras of various design in the Fashion Forms’ collection.

The first of the new styles is the U Plunge, Backless Strapless Bra (BQ 536), which comes in A to D cups, in nude and black. It features an adhesive surface on the inside, which provides the support in this minimalist design. This dramatic style, worn frequently at the shows by the company’s model, is the answer for skimpy, backless, plunging-front evening wear. Suggested retail price is $36.00.

The Water Bra (BQ 096) comes in sizes 34 to 38, B to D, in white and black. It is not completely new: Fashion Forms originally created the Water Bra in 1993 as a variation to a foam padded, push up bra. Now the Water Bra now it is back and “hotter” than ever, according to a spokesperson. It is available in the original smooth version as well as a new lace version. This bra is the answer for women who want the push up, but with the natural feel provided by a water bra. Suggested retail price is $28 for both versions.

The Clear Back Strapless Bra (BQ 955) is a strapless bra that gives the wearer an option to have a clear back strap for everyday wear or a jeweled back strap for those “daring occasions she might want the jewels of her bra to be seen.” The bra comes with both straps and can be adjusted for the perfect fit. Suggested retail is $24.00, and is available in 34 - 36 - B-C.

The new Glam Lace Bralette ( BQ 007), is a soft cup design for the woman who does not like wires, as well as for those who are layering under other garments. It is available in white, black and light pink, sizes S to XL. Suggested retail price is $18.

The new Bikini Plunge Bra (BQ 052) has the silhouette of its namesake swimwear. It is available in sizes 32 to 36, A to C cup, in black or nude. It features a thin band that does not bind. This is for the younger, smaller-breasted woman who wants a low plunge bra for all of her trendy apparel. Suggested retail is $20.

The new Vintage Couture Bralette (BQ 708) is a soft cup bra available in a variety of colors including nude, black, white, hot pink, light pink, purple and yellow. “This bra is designed for the woman who want to have fun!” declared the spokesperson. “It can be worn as a layering piece or as a casual everyday bra.” Suggested retail is $15.00.

Fashion Forms will next exhibit at the upcoming International Lingerie Show in Las Vegas (March 26-28), with many of its products on display.