To receive more info from Zinke about a particular product, Click on the photo (photo will enlarge).

A look from Zinke. 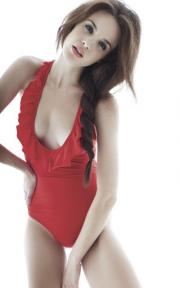 (Filed Under Wholesale Swimwear News). (CurveNV Report) Zinke recently added swimwear to its line of lingerie and the new collection is starting to arrive in stores in mid-February.

There are eight two-piece swim styles, all made to mix and match, and two one piece designs. The company manufactures in the New York area. and utilizes its own, exclusive prints (for this collection an interesting geometric print in pastels). For the new swim grouping there are two prints and five solids, including pastel pink, yellow, blue and brick red.

Sizing is small, medium and large, with suggested retail prices ranging from $66 to $88 per piece for the suits (sets averaging at $130) and cover ups ranging to $198. Minimum order is $500 per collection and four pieces per style for both swim and lingerie. They ship immediately from inventory.

Zinke lingerie sells in such stores as Anthropolgie, Largo Drive in LA and Brooklyn Fox in NY.

In addition to February Curve in Las Vegas (February 11-13), Zinke plans to attend the Miami swim show in mid-July and Curve New York later this month, as well and in August.