To receive more info from Pretty Polly about a particular product, Click on the photo (photo will enlarge). 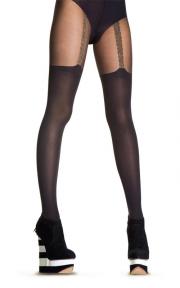 (Filed Under wholesale Hosiery News). Pretty Polly, a prominent UK hosiery brand, is in the midst of an aggressive push into the US market. Already selling in several stores here, the company recently hired a New York-based account manager, contracted Brandlink Communications in mid-summer to promote the line and held a press event in New York just last week.

Pretty Polly is owned by Courtaulds Textiles, which in turn is owned by PD Enterprise Ltd, a Hong Kong-based supplier that purchased Courtaulds from Sara Lee in 2006. Other brands owned by the company include Berlei, Gossard, Aristoc and Elbeo.

Rocco Damiano, an executive with extensive experience at a variety of companies ranging form Karen Neuburger to Pascale Madonna lingerie, was hired in early November to serve as US account manager. He confirmed that Pretty Polly is already sold in the US at such retailers as Nordstrom, Urban Outfitters, Top Shop, Pink Slip and Herroom.com.

Under the Pretty Polly umbrella, three price points are offered in the US. At the high end is a collection of hosiery created with British designer Henry Holland, which Damiano said retails here at about $34 a pair. Featured are such items as trompe-l’œil tights made to look as if they are really stocking attached to garters; tights scattered with large letters and tights with the Union Jack flag pictured over both legs (stripes on one leg, stars on the other).

The wholesale showroom for Pretty Polly is located within the Hanro showroom at 358 Fifth Avenue. And, because a relationship exists between the owner of Courtaulds and Hanro said Damiano, Pretty Polly also utilizes the US logistics facilities of Hanro. Thus, he said, shipments to US retailers are expedited.

Eugene Culhane, the UK-based sales director for Pretty Polly at Courtaulds Brands Ltd. wrote in an e-mail interview that, “Our immediate goal for the US is to establish ourselves as the fashion legwear brand.” He added, “We want to replicate our UK position that allows women to buy Pretty Polly products in a range of channels: from grocery through to boutiques through to top end departments stores.” To illustrate this multi-channel distribution philosophy for the US, he noted, “We have already established some opening price point products in pharmacy channels whilst Nordstrom carries our House of Holland Designer collaboration.”

According to Culhane, Pretty Polly, which is about a $30 million brand worldwide, has optimistic plans for the US market. Addressing the retailers of the nation he said, “Get in touch. We will definitely have a great product to suit you. Pretty Polly is a fun, trend setting, accessible British brand with exemplary manufacturing and trading credentials.”

Damiano said his goal is to “continue what we are doing,” adding he is pursuing all department stores but, at the same time, “not walking away from the boutiques.” He said he is “looking for retailers that can understand and execute what the product is all about.”

The account manager said the Brandlink has helped the firm get publicity in such news outlets as OK Magazine, Seventeen, the NY Post and Style.com, as well as some placements on the legs of celebrities.

According to company information, “Courtaulds Textiles is Britain’s largest producer of lingerie and underwear. The organization employs around 20,000 people across 16 countries in Europe, North America and Asia, and has annual turnover exceeding £1billion, 40% of which is earned by sales to Marks & Spencer. It markets its products under leading retailer labels across the world as well as its own reputed brands.” According to the Times of London, “PD Enterprise Ltd., a privately held company based in Hong Kong, operates nine facilities that produce more than 120 million garments annually. Its products include bras, underwear, night wear, swim and beachwear, formal wear and casual wear, jackets and coats, babywear and socks.”