To receive more info from Rubies about a particular product, Click on the photo (photo will enlarge). 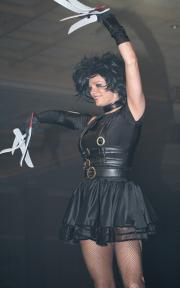 The company will be producing costumes for the June 2012 live-action fairy tale film "Snow White and the Huntsman," starring Kristen Stewart, Charlize Theron and Chris Hemsworth. Costumes will also be produced for the vampire saga "Dark Shadows," a Tim Burton film starring Johnny Depp and Michelle Pfeiffer that is slated for a May 2012 release. The company also picked up the license for Activision’s "Skylanders" video game. Howard Beige, executive vice president of Rubie’s, told BODY Magazine that "Skylanders" was the first license the company ever pursued that was "based purely on technology rather than music, pop stars or movies."

New York-based Rubie’s Costume Company, Inc. has been manufacturer and wholesaler of costumes since 1973.