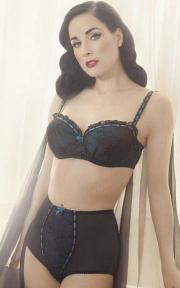 Von Teese, known for her burlesque performances and modeling for high-end designers as well as a short marriage to shock-rocker Marilyn Manson, will launch Von Follies in February 2012 exclusively through Target Australia stores and target.com.au. The line will consist of 10 collections inspired by Von Teese’s own personal collection of vintage lingerie. Styles include satin, lace and animal-print overwire bras, corselettes, high-waisted briefs and garter belts. Prices will range from approximately $17 to $79 with briefs up to a size 20 and bras accommodating up to an E cup.

"I wanted to design pieces that are tributes to my vintage obsessions, to make them functional and beautiful while modernizing them for everyday wear," stated Von Teese. "It’s something that has been quite a task to create, but the end result is so chic and so unique. I’m very proud of it."