To receive more info from Curve about a particular product, Click on the photo (photo will enlarge). 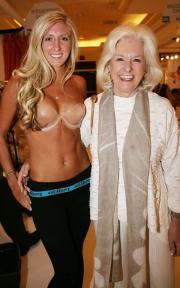 (Filed Under Event News). The CURVENV trade show, held August 22 to 24 at the Venetian Hotel in Las Vegas, had a steady turnout compared to last year’s show.

Attendance was reported as 2,574, compared with approximately 2,500 last August. This includes 30 percent new buyers from not only the United States, but Argentina, Australia, Canada, Caribbean nations and Japan.

To celebrate the integration of swimwear into the Curvexpo shows, VIP attendees were treated to events including the So CURVE So SWIM Fashion Show at the Crazy Horse Paris, which showed off spring/summer 2012 swimwear collections from brands like Vitamin A and Leonisa.

The next Curvexpo shows will be held in New York City and Las Vegas in February. Exact dates and locations have yet to be announced.