To receive more info from Shirley of Hollywood about a particular product, Click on the photo (photo will enlarge). 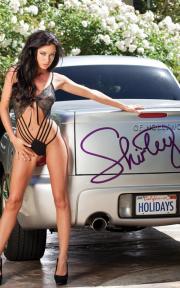 A look from Shirley of Hollywood.

"Our buyers had been asking to see and book Valentine’s items sooner," said Eric Schlobohm, international sales director for Shirley of Hollywood. "In addition to that, we added a Mardi Gras section highlighting purples for a little Bourbon Street style, and we have some playful masks adorned with feathers, ribbons and sequins. And not to miss a single beat, a kelly green St. Patrick’s Day section has been incorporated."

The catalog features a new magazine-style layout with sections and stories, highlighting new and bestselling items like Shirley’s Versatile Reversible Corsets, corsets that feature several looks in one garment to be used as underwear, outerwear and last-minute Halloween costumes. New men’s items include interactive novelties and animal-themed garments.

According to Schlobohm, initial response and bookings "have been fantastic." The holiday collection debuts at the September 19 at the International Lingerie Show in Las Vegas, and items will begin to ship September 25.

Vernon, Calif.-based Shirley of Hollywood products can be found in retailers and online stores across the U.S., including HerRoom.com, LingerieDiva.com and BiggerBras.com.