To receive more info from Bragel about a particular product, Click on the photo (photo will enlarge). 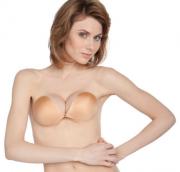 Updated NuBra Will Be Similar to this Style

(Filed Under wholesale Lingerie News). Bragel International, Inc. will begin showing selected retailers its newest version of the NuBra at the upcoming Curve shows in New York and Las Vegas. Vice president Daren Peng explained that the new product (which does not yet have a style number or name) is lighter in weight than its existing bras, and, most important, breathable.

Bragel, which opened in 1989, has developed a range of bras, breast enhancers, prostheses and accessories which it sells internationally.

Currently its most popular bra, the NuBra Seamless (style SE 888) is a backless, strapless, self-adhesive with reusable medical-grade silicone adhesive which wholesales for about $20.

The new design is similar to the NuBra Seamless but, according to Peng, should prove more comfortable for the user because it is breathable, cooler and less likely to promote perspiration.

Peng added the new style will be priced slightly higher than the NuBra Seamless and with targeted ship date towards the end of this year.