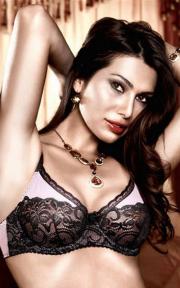 (Filed Under wholesale Lingerie News). Baci Lingerie reported that it made a strong statement as the main sponsor of this March’s International Lingerie Show (ILS), which the brand described as the "biggest lingerie show in the U.S."

At the show, which was held from March 28 through 31 at Las Vegas’ Rio Hotel, Baci Lingerie introduced its Black Label collection, a three-year investment of hard work, planning and over $20 million, the brand said. Black Label encompasses over 500 new styles of "beautifully and sophisticatedly designed lingerie."

Baci Lingerie called the show "a huge success for the brand as Baci Lingerie products are quickly changing the industry based on the idea of affordable luxury." The brand added that, since starting to ship six months ago, it is selling to 5,000 stores in the United States, and picked up more than 700 new doors, including two major chains, at this spring’s ILS. The brand has released a global promotional trailer of the exhibition which can be seen here.

March’s ILS marked the brand’s one year anniversary, "We have grown and learned a lot in the past year and always look forward to exhibiting," said Michelle de Cespedes, director of international trade shows for Baci Lingerie. "We have grown tremendously fast in the past year and although Baci Lingerie has only been delivering goods for half a year we are now selling to over 25,000 doors worldwide in over 18 different countries. We look forward to continuing to build the Baci Lingerie brand and providing the experience of affordable luxury.

"It was fun to be back at the ILS this year and it was a great opportunity for us to display our Black Label collection which will be [ready] for delivery shortly. We took pre-orders [...] and were stunned at the amount of order that was written and how well the collection was received. This new category of high-end styled lingerie for extremely low prices is already revolutionizing the industry."

Baci Lingerie is looking forward to meeting new partners and developing new relationships at its future shows, and at the opening of its monobrand stores in Budapest next month.