To receive more info from Jezebel about a particular product, Click on the photo (photo will enlarge).

Jezebel Finds Success at the ILS 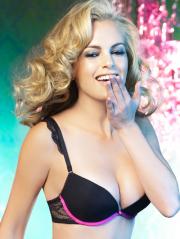 (Filed Under wholesale Lingerie News). Jezebel, a relative newcomer to the International Lingerie Show (just completed in Las Vegas, March 28-30) has found success at the exhibition: it was the third session in a row it has attended.

“It’s been doing fantastic. Busy, busy, busy. It’s amazing,” said Rozita Yazditabar, special accounts manager, speaking about the latest show. And it can be confirmed, at least from the casual observation of this reporter, that her booth was, indeed, constantly busy in late March.

What is particularly significant about the success of Jezebel at the ILS is that the vast majority of mainstream lingerie brands have consistently spurned the show for years. The Jezebel brand is the lower-priced sister to Felina, a brand that is sold in such stores as Nordstrom and Macy’s. Both brands are a part of Piege, Co. Inc., a company operated by the Zarabi family.

“The Jezebel line is cheap and cheerful,” declared Yazditabar at one point during a recent interview. (Currently, Macy’s listed regular prices for the Jezebel bras at $24-$32 and thongs at $10-$12, with sale prices even lower). Yazditabar, however, was quick to emphasize that despite the relatively lower prices, the quality of the fabrics and construction is high.

While some mainstream brands believe the buyers at the ILS show would not appreciate their offerings, this special accounts manager told us, “People just walk by and fall in love with the merchandise. Anybody and everybody says this is the only company that they see with much, much better quality merchandise,” at the ILS.

Jezebel Finds Success at the ILS
New From Andrea Billard