To receive more info from Coquette about a particular product, Click on the photo (photo will enlarge). 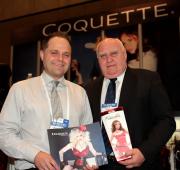 (Filed Under wholesale Lingerie News). Coquette has implemented several significant changes that reveal the changing nature of its business as well as the influence of the younger generation at the family-owned and operated company.

Marcus Horea, Coquette’s vice president of sales and marketing, who was joined for part of an interview by his father, Peter, a co-founder of the company, discussed the upcoming move of their warehouse from Buffalo to Los Angeles, the recent redesign of their logo, the overhaul of their boxed lingerie line, a re-commitment to its Darque fetish collection, and ambivalence over Zakk, its men’s brand.

Perhaps the biggest physical change for the company is the move of its warehouse to a 25,000 square foot facility near Los Angeles. The new place, open by June, will not only be about 5000 square feet larger than the Buffalo location but also provides for much more vertical storage space than the 10-foot ceilings at the NY building. Originally the company produced most of its lingerie in Canada; now the bulk is produced in Asia and shipped through Los Angeles. (An interesting note is that that company still currently employs about 10 Canadian sewers to fill in gaps in its overseas orders).

Peter Horea declared that the move would save the company money as well as cut down shipping time from the Orient. “We do not have to ship across the U.S.” In addition, the new warehouse is located only five minutes from one of Fedex’s (their preferred shipper) main hubs.

The new logo utilizes a san serif type face, replacing an italic script. Clearly father Peter Horea would have preferred not to make the change but said he was “outvoted.” Son Marcus Horea explained, “We wanted to clean up the look, to open it up, to give it more of a boutique feel. It was dated. We wanted a clean, new look. I have only heard good things” about the switch.

Another move over which Peter Horea was apparently outvoted involved the company’s boxed lingerie line. The change includes a uniquely-shaped box (oddly shaped boxes are a significant trend among sexy lingerie makers these days). “Now it is Kissable instead of the Signature Collection,” explained Marcus Horea. The one-size-fits-all lingerie comes in a trapezoid box, complete with metallic foil coating. Prices range from for $24.99 to $29.99. “We spent some money on the new look,” he continued, noting that an outside consultant had been used for the collection.

Also just out is a separate, 64-page catalog for Coquette’s long-established Darque collection of fetish intimates. In recent years, according to Marcus Horea, Coquette had relegated the brand to only about 25 pages in its main catalog. “There was no [separate] catalog in the past two years. Now it has its own. Our fetish customers want their own catalog. When it was in the main book it did not sell as well,” he said. As the new catalog indicates, the company is again firmly committed to fetish. “Darque has always been a good line for us. The volume is strong for the amount of SKU’s we have.”

One area that may receive less attention from Coquette in the future is men’s intimates, once a more heavily-promoted segment for them. For example, several years ago the company had run separate trade ads for its Zakk men’s intimates, and had even brought a male model to promote the brand at shows like the International Lingerie Show. “We are in limbo,” with the men’s line, admitted Marcus Horea. “We don’t know what direction,” the company will be taking in this segment in the future.

Recently Coquette ended a five-and-a-half year licensing relationship with Penthouse, and Marcus declared he has “no plans” to pursue other licensing opportunities. “It might never happen again,” he offered, a sentiment that seemed to be shared completely by his father.