To receive more info from PAE Fashions about a particular product, Click on the photo (photo will enlarge). 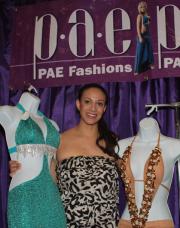 (Filed Under wholesale Lingerie News). PAE Fashions, originally a company focused on dresses for the gentlemen’s club market, arrived at its second International Lingerie Show (which opened today and runs through Wednesday) with news of expansion into additional apparel categories and plans for new marketing alliances.

The company is the creation of Paula Andrea Echeverri (which is where the initials come from) and her sister Adriana, and was launched in 2008. Paula explained that she is the “official designer for Scores and Penthouse Executive Club in New York City” and the dresses were first worn by hostesses at both locations, but have since been purchased by women from other clubs and are being sold to the public in stores and on line.

Produced in Colombia, the dresses are dramatic, colorful and often elaborately bejeweled. According to Echeverri there is a strong emphasis on “quality” and “bringing fantasy to life.” She added that a particular inspiration is the “exquisite beauty of gemstones our gowns emulate.” There are about 90 different dress styles in the expanding collection according to the designer.

And now PAE denim jeans (over 30 styles), bras, panties and swimwear have been added to the collection and were on display at the show.

Echeverri explained that the company is at the ILS looking to expand its distribution to additional retail outlets around the country and is considering hiring independent reps for various territories. She noted that the company is also “currently in talks of producing lines for celebrities, models and adult stars,” but added “we are not yet at liberty to discuss” the details.