To receive more info from Frederick’s of Hollywood about a particular product, Click on the photo (photo will enlarge). 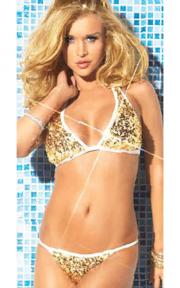 A Frederick’s of Hollywood swimwear style.

(Filed Under Financial and General Interest News). Frederick’s of Hollywood Group Inc. announced last week that it has entered into an exclusive, multi-year licensing agreement with Emirates Associated Business Group (EABG) to open retail stores throughout the Middle East.

Under the terms of the agreement, Abu Dhabi-based EABG must open a minimum of 10 Frederick’s of Hollywood stores in six Middle Eastern countries over the next three years. Additionally, a flagship store in Abu Dhabi is expected to open this April.

Thomas Lynch, chairman and C.E.O of Frederick’s of Hollywood, reported that the company is entering the international market to broaden its customer base. “Frederick’s of Hollywood is known as a fun, sexy brand for women around the world; however, we currently only sell our products in North America,” he said. “This agreement with EABG to open stores in multiple Middle Eastern countries is an exciting first step for [us] in our strategy to extend our customer reach to new parts of the world. By utilizing licensing agreements to enter new geographic markets, we can cost effectively and quickly grow our business, while also benefiting from our partners’ knowledge, presence and experience in these new retail environments.”

Raid Abu Hudra, C.E.O of EABG, said: “We expect that the Frederick’s of Hollywood brand’s fun and luxurious image will successfully carry over to the Middle East and will be a hit among young Middle Eastern women.”

Established in 2001, EABG focuses on key emerging sectors and global opportunities, employing a workforce of over 30,000.