To receive more info from Aussiebum about a particular product, Click on the photo (photo will enlarge). 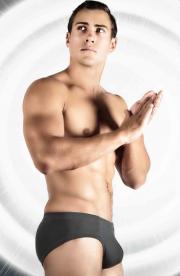 (Filed Under wholesale Men's Underwear News). In a departure from its crotch-enhancing line announced last fall, Aussiebum is aiming for straightforward masculinity with its new brief, called Man.

The company described Man as an updated version of the classic brief, with supportive yet light fabric and no heavy banding. Made from a blend of cotton, elastane and polyester, the brief is available in shades of white and charcoal. It comes in sizes XS through XXL and retails for 22.45 Australian dollars; comparable to $22.70 at the current exchange rate.

According to Sean Ashby, founder of Aussiebum, Man offers an uncomplicated sexiness that is being forgotten in talks about the modern man. “There is so much unnecessary analysis and discussion out there about who the new age man is and the lengths he’s supposed to go to evolve, but it really doesn’t have to be that complicated for a man to sexy, strong and refined,” he said. “Man is the next generation of men’s brief […] Its form-fitting cut is free from loud branding or extra bells and whistles. The underwear is there to complement—rather than distract from—the man that is wearing it.”

U.S. retailers carrying Aussiebum include Freshpair.com, MensUnderwearStore.com and Male UWear in Houston, Tex., among others.