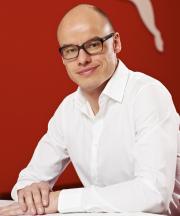 (Filed Under wholesale Activewear News). Activewear company PUMA announced last week that Franz Koch, currently the head of Global Strategy, will succeed Jochen Zeitz as C.E.O. when the company transforms into a European corporation. Effective immediately, he will join the company’s board of management as chief strategic officer.

As announced last year, PUMA will convert into a European Corporation under the trading name PUMA SE. The transformation is subject to approval at the company’s shareholder meeting on April 14. Following this conversion, Koch will succeed Zeitz as C.E.O. Zeitz, who has held the position of PUMA’s C.E.O for 18 years, will become executive chairman of PUMA SE.

PUMA hired Koch in 2007 as global strategic planner. In this position, he has worked on long-term strategic group development and management of special projects for PUMA. He also helped execute the company’s restructuring program in 2009.

“Having an exceptionally analytical yet most pragmatic mind, Franz Koch has been one of the key drivers of PUMA’s strategic course and strongly contributed to our 2010 record sales level,” said Zeitz. “Together, we have defined the company’s five-year strategic plan, which will be the catalyst to tap into PUMA’s envisaged sales potential of 4 billion Euros in 2015. I am convinced that Franz is the right person at the right time and that he is the most qualified candidate and dedicated individual to take the helm at PUMA. I will personally accompany Franz’ transition period and I look forward to continuing a close and trusting cooperation with him.”

François-Henri Pinault, Chairman of PUMA’s Supervisory Board, described Koch as the natural choice for the position. “[Koch’s] excellent knowledge of the company and strategic expertise will guarantee a seamless handover and continuation of the company’s growth strategy,” he said.

Koch will continue to work out of PUMA’s headquarters in Herzogenaurach, Germany.

The PUMA Group owns the PUMA, Cobra Golf and Tretorn brands. The company employs over 9,500 people globally and, in addition to Germany, has offices in Boston, London and Hong Kong.