To receive more info from Nordstrom about a particular product, Click on the photo (photo will enlarge). 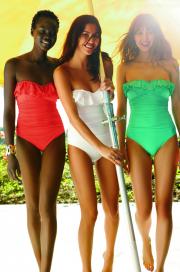 (Filed Under Fashion News). Nordstrom Inc. is partnering with Caruso Affiliated to open a three-level, 135,000-square-foot store at the Americana at Brand mall in Glendale, Calif, which is owned by Caruso. The full-line location is expected to open in 2013.

Nordstrom will continue to operate its current full-line location in Glendale—which Caruso will purchase as part of the relocation—until the new store opens. This is the second project between the retailer and Caruso Affiliated; Nordstrom has operated a store since 2002 at Caruso’s the Grove mall in Los Angeles.

“Glendale was one of our earliest stores in southern California, and we’re grateful to the community for the support they’ve shown us since we first opened there nearly 30 years ago,” Erik Nordstrom, president of stores for Nordstrom, said in a statement. “We owe our Glendale customers a lot and they deserve the best store experience we can offer. While Glendale Galleria has been a good home over the years, we think moving into a brand new store at the Americana at Brand will help us do a better job of serving our customers.”

Rick Caruso, C.E.O of Caruso Affiliated, expects Nordstrom to add to the Americana store assortment. “This deal not only will result in a new, best in class department store at the Americana at Brand, but also an opportunity for our company to invest further in the City of Glendale and enhance the overall quality of retail offering in downtown Glendale,” he said.