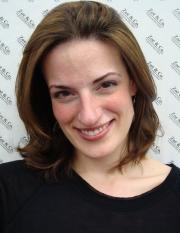 According to the company, Proulx brings an enthusiastic spirit and dedication to her new position valued by her clientele and fellow associates. She has successfully completed Zoe & Co’s training program, which is designed to instruct fitters on achieving "the perfect fit" that the store has built its reputation upon.

Proulx first discovered Zoe & Co. while preparing to play to lead role in a stage production that the store sponsored, and being fitted herself. “We find that when a fitter has shopped with us before, they’re better able to connect wit their customers,” said Elyssa Paris, manager of Zoe & Co. Concord. “Katie brings an understanding and a sensitivity to her customers that makes for a truly enjoyable bra fitting experience.”

Zoe & Co. carries bras in sizes AA to JJ, as well as foundations and hosiery. The company has a store at 92 N. Main St. in Concord, N.H., and a second location at 69 High St. in Westerly, R.I.