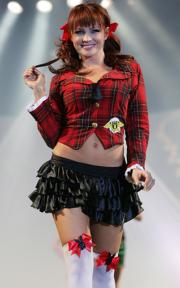 Halloween Show 2010: A schoolgirl by Rubie’s on the runway.

(Filed Under Event News). Michael Moreira, show manager for Specialty Trade Shows Inc. (Spectrade) expects traffic to be up at this spring’s International Lingerie Show (ILS), which is being held in from March 28 through 30 at Las Vegas’ Rio Hotel.

“ILS is one of the few shows out there that continues to grow,” Moreira said. “We have a proven track record of bringing back buyers, and at the upcoming show we have 85 percent returns on exhibitors from September 2010. We are expanding because we have the best show in the industry, and our customers believe in us. This time around, we were able to sell out earlier than ever, and saw an increase in pre-registration.”

Once again, Spectrade will hold the Las Vegas Halloween Show in conjunction with the spring edition of ILS as a separate show. Even more than in previous years, Moreira reported that the upcoming event will host the best-selling sexy costume brands in the industry.

“We have a solid base of sexy costume companies that will show buyers an incredible selection,” he said. “The Las Vegas Halloween Show allows the independent Halloween retailer to buy later and still have face-time with the top manufacturers in the industry without being pushed out by the larger chains. Our long-term vision is to become an all-encompassing Halloween show, but this time around we are focused on the sexy costume market.”

He added that, since ILS and the Las Vegas Halloween Show are held in conjunction, they allow the lingerie boutique retailers who are expanding into sexy costumes to shop for both categories. In addition, show organizers have noticed that some costume retailers are becoming interested in picking up lingerie to provide a new revenue stream during slow costume seasons.

Returning exhibitors at the Halloween Show include Secret Wishes, a division of Rubie’s, Forum Novelties, FunWorld, Smiffy’s, Leg Avenue, Dreamgirl, Seven ’til Midnight, Shirley of Hollywood, Roma Costume and others. Delicious Sexywear is returning to ILS and Mystery House will show its new Frederick’s of Hollywood costume line at ILS as well. Both the ILS and Hallloween Show will also welcome new exhibitors including Elope, Poisonous Legwear and Fetisso Latex.