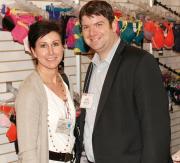 (Filed Under Event News). Despite the rising cost of cotton, organizers said they were able to offer buyers product variety at the recent OffPrice Show, held during Las Vegas Fashion Week from February 11 to 14 at the Sands Hotel.

According to organizers, buyers found great product options in immediate stock; some offered at last year’s prices despite the fact that cotton goods have increased by as high as 30 percent in price.

Volume Apparel, a maker of thermal sets and loungewear, offered prices that were similar to last year’s rates. “We are close to selling out of our thermal sets, not only because of the pricing, but also the quality and comfort is superior,” said Scott Zunick, a partner with the Massachusetts-based company. “The thermals and the loungewear were the big winners, but we also did well with our other commodity items, like flannels and twill shirts with quilt lining.”

Steve Forman of New York Apparel, a Las Vegas-based distributor of Hanesbrands, equated his success at the show with low costs. “Almost everyone who came to the booth bought something from us,” he said. “I think that with the cost of cotton and supplies going up, people wanted to take advantage of the off-price market before the eminent price increases.”

Show organizers also said that footwear and other growth categories added to its success, with new exhibitors able to write business with large and small retailers.

“We’re adding more footwear to our store, but not enough to require us to go to one of the dedicated shoe shows,” said Peggy Lee, owner of Bob’s Beach Shack, a store in Lake Geneva, Wis. “The quality and variety of footwear at OffPrice were ideal for our needs. Customers in our resort community are expecting to see more eveningwear with nice designs in addition to the sandals and flip-flops at a store like ours. OffPrice really delivered for us!”

Jim Fennema, executive vice president of Fred’s, a discount store in Memphis, Tenn. with over 700 locations, described OffPrice as better meeting his needs as a major retailer with these growth categories. “Overall we met most of our goals. We were able to see goods to supplement our spring/summer needs,” he said. “We also look forward to seeing more accessories and footwear at OFFPRICE as the show continues to grow these two vital categories.”

The next OffPrice event, “A Taste of OffPrice,” is scheduled for May 1 through 3 at Gotham Hall in Manhattan during New York Fashion Week.