OKHA Brings Minimalism to the States 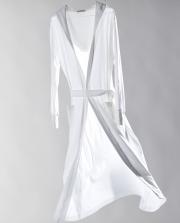 (Filed Under wholesale Loungewear News). Munich-based OKHA will show its fabric-driven basics, loungewear and linens at next week’s CurveNV. This is the company’s first appearance at a CurvExpo tradeshow and marks its entrance in the U.S. market.

Company representatives will show buyers the fall/winter collection for a wholesale price range of 15 to 50 Euros, equivalent to approximately $20.31 to $67.71 at the current exchange rate. Looks include micromodal pants in legging and wide “boyfriend” styles that draw inspiration from men’s underwear, as well as T-shirts, oversized sweaters, and long and short night dresses, all in muted tones of white, gray, orange and blue for the cooler months. They are available in sizes XS through XL.

Ina Solbach, the designer who founded OKHA in 1999, creates each loungewear piece as a loose fitting “second skin” with a timeless, sophisticated aesthetic. For fall/winter, her goal was to create contemporary looks with a vintage, Japanese touch.

In Europe, OKHA is sold in Germany, Britain, France and the Benelux countries. Stores carrying the brand include Selfridges in London and Le bon Marche in Paris. In Germany, Solbach operates the Sunday in Love boutiques in Hamburg and Munich, where she sells OKHA and additional lingerie and casual labels like Princesse Tam Tam and Pure Cashmere. Through her annual stand at the Maison et Object tradeshow in Paris, she has recently gotten requests from the United States and Asia.

OKHA Brings Minimalism to the States