Dreamgirl Costumes on the Runway 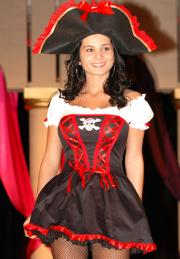 A Pirate costume by Dreamgirl.

(Filed Under Event News). During Dreamgirl’s exclusive costume preview at the Cosmopolitan Hotel in Las Vegas, the company held several runway shows per day, featuring looks from its new Halloween line, ranging from sexy policewomen to fairies to sailors and pirates, to name a few.

Here are some key women’s and couple’s looks from the collection. BODY also noticed a larger selection of children’s costumes than put out by the company in previous seasons.