To receive more info from Carrie Amber about a particular product, Click on the photo (photo will enlarge).

A look from Seven ’til Midnight.

Added: Jun 2012
A look from the bridal collection.

Seven 'til Midnight Adds Plus Sleepwear 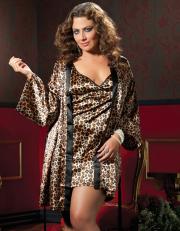 Plus-size sleepwear by Seven ’til Midnight.

(Filed Under wholesale Sleepwear News). Seven ‘til Midnight, which has long made plus-sized lingerie and costumes under its trademarked Baby Got Curves line, is now producing plus-sized sleepwear.

The sexy brand, which added sleepwear to its Holiday 2011 collection last August, followed up by offering 50 percent of its sleepwear styles in the 2011 Lingerie collection in sizes 1X/2X and 3X/4X. These include five satin pajama sets that wholesale for $16, and select mesh and lace chemises in Baby Got Curves.

Vinh Luong, director of sales and marketing for Carrie Amber, the company that makes Seven ‘til Midnight, described size variety as a priority for the company. “After the success of sleepwear with the holiday 2011 collection, our customers were asking for sleepwear in plus sizes,” she said. “Seven ‘til Midnight is one of the leaders in offering plus size lingerie at a competitive price point. Sleepwear is a growing category that is in high demand throughout many seasons, such as Valentine’s Day, Mother’s Day, ‘back-to-school’ shopping, etc.”

And with its emphasis on variety across categories and sizes, it is not surprising that Seven ‘til Midnight’s plans for sleepwear extend beyond its current range. “Since we have seen such a great response to our sleepwear line, we have future plans to keep growing it,” Luong said. “We plan to add more styles in our satin pajamas. We also want to grow our bridal plus-size collection. Retailers say that our sleepwear is a great gift seller!”