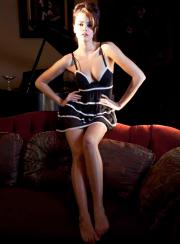 Zimmerman is known for his photographs of Mohammad Ali, Michael Jackson and other celebrities, but has focused on portrait painting in recent years. However, when he ran into Rhonda after moving from Los Angeles to Tampa Bay, Fla., she convinced him to shoot the new catalog. The two first met in the 1980’s and he shot photographs of her throughout her time as the host of “USA: Up All Night.”

Included are about 70 of the company’s core styles in six collections, with a focus on the lingerie-inspired shapewear and intimates seen in the new Shear Noir collection. Seamless separates, basics, sleepwear and loungewear are also featured.

The catalog includes direct-to-consumer styles sold on HSN, as well as a focus on the retail market, which the company is growing.