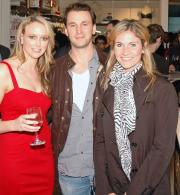 Claire Chambers, owner of Journelle, with attendees at the Soho store's opening party.

(Filed Under Event News). Journelle Soho welcomed a packed house at its opening party on the evening of November 18, indicating the success of the now three-store lingerie boutique headed by founder Claire Chambers.

Ted Vayos, associate publisher of BODY Magazine, said he has seen rush-hour subway cars that were less crowded than the party. Models sifted their way through a throng of champagne-sipping guests vying for room to browse the 1,800-square-foot store’s selection of luxury intimate apparel by Damaris, Bordelle, Elle Macpherson Intimates and others.

As previously reported by BODY, Chambers plans to open four more stores over the next two years with the ultimate goal of more than doubling the boutique’s current number of locations. Aside from Journelle Soho, the retailer operates its flagship store in New York City's Union Square as well as a location in Miami, Fla.